The program, whose excerpts can be heard online on this website, ranges from Mozart to Chopin, from Brahms to Granados, offering true emotions thanks to the interpretation and sensitivity of the execution.

Want to have your copy of the CD? Fill out the form at the bottom of the page to get it at a special price, shipped to your home. 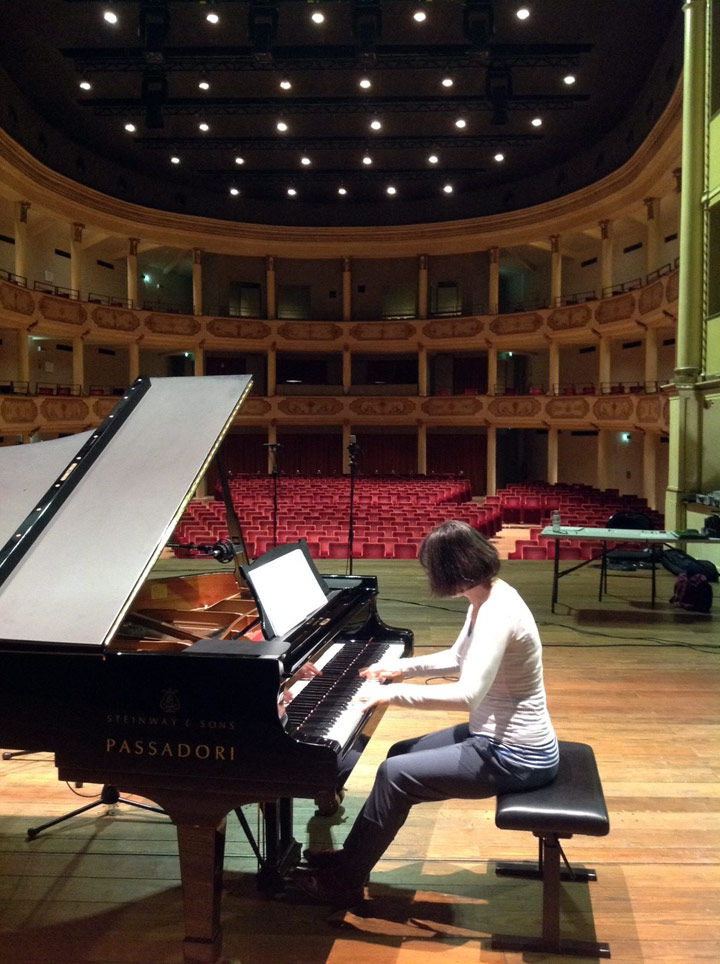 The heterogeneus programme contained in the cd that includes different styles and periods allows to appreciate the technical and expressive qualities of Fiammetta Corvi. In fact it ranges from classicism (Mozart) to romanticism (Chopin), reaching late-romanticism (Brahms) and finishing with the twentieth century (Granados).

The Sonata in la maggiore K. 331 is one of the most famous compositions by Mozart (1756-1791). It was published in 1784 by the editor Artaria. It is conceived in a free form and is the only one (apart from the young Sonata K. 282) whose first movement is not in “Forma-Sonata”. The first movement is “Andante con variazioni” based on an exquisite thematic inspiration of elevated melodic purity, like a Lied. The “Minuetto” (the second movement), with admirable timbre resources, is distinguished by its spirituality and its lyricism. The very famous third movement (“Alla turca”) is in French Rondò form. In this Sonata Mozart adopts a virtuoso hand: passages in octaves, crossing of hands, parallel thirds and broken chords. This Sonata, together with the Sonatas K. 330 and K. 332, belongs to Mozart’s so-called “Viennese years”.

The magnificent Ballata n. 1 in sol minore, op. 23 by Chopin (1810-1849) is a page full of intense passion, emotion and melancholy. As regards the intensity of the melodic accent, the richness of the harmonic structure, audacious for the times, and its virtuoso element it can be considered among Chopin’s most complete works. It has a three-part structure, beginning with a Largo, followed by a moderato and ending with a “Presto con fuoco”. Its musical value is strictly linked to the contrast between calm and surge and between the rising and the easing of pathos. It is a composition enanced by accents of aristocratic Parisian mondanity and represents the perfect incarnation of the romantic soul in the dimension of the sound of the pianoforte. Chopin started composing it in the spring of 1831 in Vienna and completed it in 1835 in Paris. The polish musician was the first to give the title of “Ballata” to an instrumental piece; originally it was known as a refined vocal composition.

The 16 Waltzes op. 39 by Brahms (1833-1897), originally written for piano four hands in 1865, are here proposed in the version for piano two hands, re-elaborated four years later by the same Brahms. They are works of an extreme limited dimension, very similar to each other in structure and still enchanting in their drawing-room semplicity. They are Waltzes of tender brilliance, that can be suitable for family context and for little concert halls. The basic differences among the varied pieces can be placed in the articulation of the details, in the colour and in the detachment of the movements. It is a lovely collection, that has to be listened and appreciated in its whole. The musician’s love for the dance movements is linked to the fact that such rhythmical typologies are in splendid accord with the melodic creative nature of the composer, often animated by popular influences, that aim to touch the soul of the people they belong to. Not just by chance these Waltzes convey the atmospheres of the “Landler” (a popular german dance similar to the waltz) more than those of the abstract Viennese waltz. They are conceived in an ABA form. They were dedicated by the composer to the famous music critic Eduard Hanslick, author of the essay “Il bello musicale” (1854).

Two splendid Spanish Dances: Oriental and Andaluza by Enrique Granados (1867-1916), a composer rarely heard nowadays and unfairly undervalued, are here performed. His attention is generally turned more to the galant Spain of the XVIII century than to the genuine folklore, whose features and essential rhythms are however maintained. His art is here half-way between an intimate lyrical confession, that assumes almost personal characteristics, and the deep expression of the soul of a Country. Oriental, the second of the 12 spanish dances, written between 1892 and 1900, is a sort of confession that recalls a delicate and suffused spanishism and, at the same time, intense passion and spirituality. The most famous dance is the fifth one – Andaluza – that, besides the technical-virtuosistic aspect, presents an intensely nostalgic melody.

A cd, therefore, which can be listened to with greatest pleasure both for the value and the beauty of the pieces proposed and the interpretation of Fiammetta, who gives us deep emotions.

Buy the CD “Fiammetta Corvi in Concert” at a special price of € 13,00 with free shipping towards Italy and Switzerland (for other destinations, a shipping charge of € 3,00 is required).

In order to place your order please fill out the form below with your details and shipping address: you will receive immediately the order confirmation email containing the banking coordinates for the Wire transfer or, alternatively, the email address to be used to pay via Paypal. Upon receipt of payment you will be immediately shipped the purchased CD.

To receive via email all Fiammetta concert information and events you can subscribe to the Newsletter by filling in the following form. All fields are required, thank you.

Manage Consent
Youtube Instagram Linkedin
We and selected third parties use cookies or similar technologies for technical purposes and, with your consent, for other purposes as specified in the Cookie Policy. You can freely give, deny, or withdraw your consent at any time by clicking "Manage Consent" at the bottom of the page. You can consent to the use of such technologies by using the “Accept All” button or deny and close the notice by using the "Reject All" button. Settings

Reject All Accept All
Manage Consent

This website uses cookies to improve your experience while browsing the website. Of these, cookies that are categorized as necessary are stored in your browser as they are essential for the basic functionality of the website to work. We also use third party cookies that help us analyze and understand how you use this website. These cookies will be stored in your browser only with your consent. You also have the option to disable these cookies. However, disabling some of these cookies may affect your browsing experience.
Necessary Always Enabled
Necessary cookies are absolutely essential for the website to function properly. These cookies ensure basic functionalities and security features of the website, anonymously.
Analytics
Analytical cookies are used to understand how visitors interact with the website. These cookies help provide information on metrics the number of visitors, bounce rate, traffic source, etc.
Advertisement
Advertisement cookies are used to provide visitors with relevant ads and marketing campaigns. These cookies track visitors across websites and collect information to provide customized ads.
Save & Accept